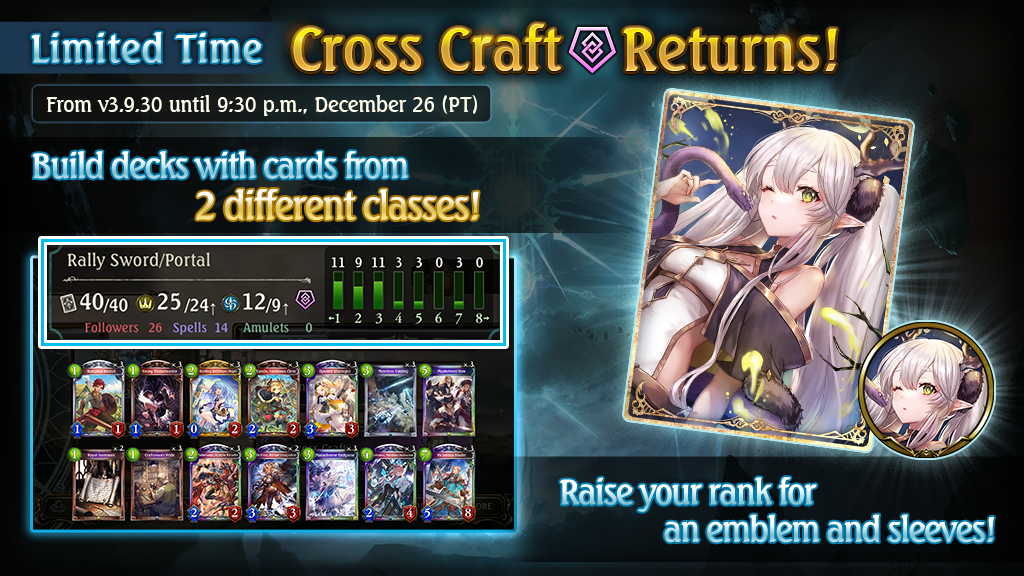 The limited-time format—Cross Craft—will be available after the v3.9.30 update.

Note: The event period is subject to change depending on the circumstances of the update maintenance.

For better game balance in this format, restrictions will be placed on certain cards. Only one of each restricted card will be permitted in a Cross Craft deck. Some cards may be banned from use within the format as well. Furthermore, some restrictions or bans might only apply to cards when used as part of the secondary class.

In addition to the initial restrictions designated at the time of the v3.9.30 update, the Shadowverse team will be paying close attention to match analytics in order to respond with additional restrictions or bans when necessary to improve game experience. Please note that cards added to the Cross Craft restriction list for this purpose will not receive a vial bonus when being liquefied.

Players will not be able to select multiple decks that include a shared class when playing in multi-match modes such as BO3 or BO5/1BAN.

Example of Invalid Best of 3 Match Deck Selection
A player would not be able to enter a Best of 3 series if selecting the following two decks:

Players can access the Cross Craft screen from the banner on the left of the Home screen. Players will be able to confirm their current Cross Craft format rank, check the current list of restricted and banned cards, as well as collect Cross Craft Rank Rewards on this screen.

The Cross Craft Trial feature allows players to use prebuilt Cross Craft decks in practice mode, ranked matches, and private matches. The Trial decks can be used regardless of whether the player has obtained cards all the cards in the selected deck or not. Players will be able to select these decks from Trial on the Select Deck screen.