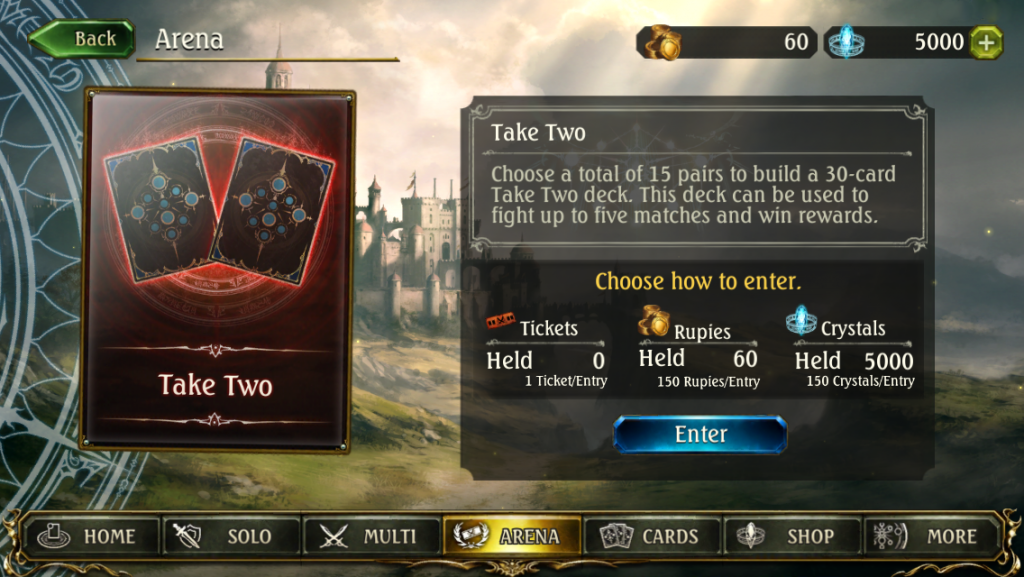 Most tournaments and events with monetary prizes have traditionally used the constructed format (battles with pre-submitted decks often used in ranked matches). Partly due to this, I haven’t touched upon Take Two in this series yet. However, a recent large-scale online tournament used this format, so this feels like the perfect time to discuss Take Two here on Kuroebi’s Tips.

In this introduction, I would like to talk about my personal opinion about what makes Take Two so much fun. But first, take a look to read about how to play.

Take Two can surprise you every time you play. Decks used in constructed matches are optimized for efficiency, so card choice tends to be limited. In Take Two, you could be offered cards you don’t often see in a constructed format; choosing the right cards from these options is key. Your opponent may even shock you with their own choices. Thus, each game of Take Two plays out differently, allowing you to see new sides of Shadowverse every time.

In Take Two, you have to put your deck together by choosing pairs of cards fifteen times. Those fifteen picks will determine how well-rounded your deck is.

Simply picking the strongest cards is a legitimate option. However, some cards could be used for interesting combos with other cards in the draft. Your 30-card deck might have excellent chemistry, potentially becoming explosively powerful. It’s irresistibly fun to curate your picks while considering potential card synergy! 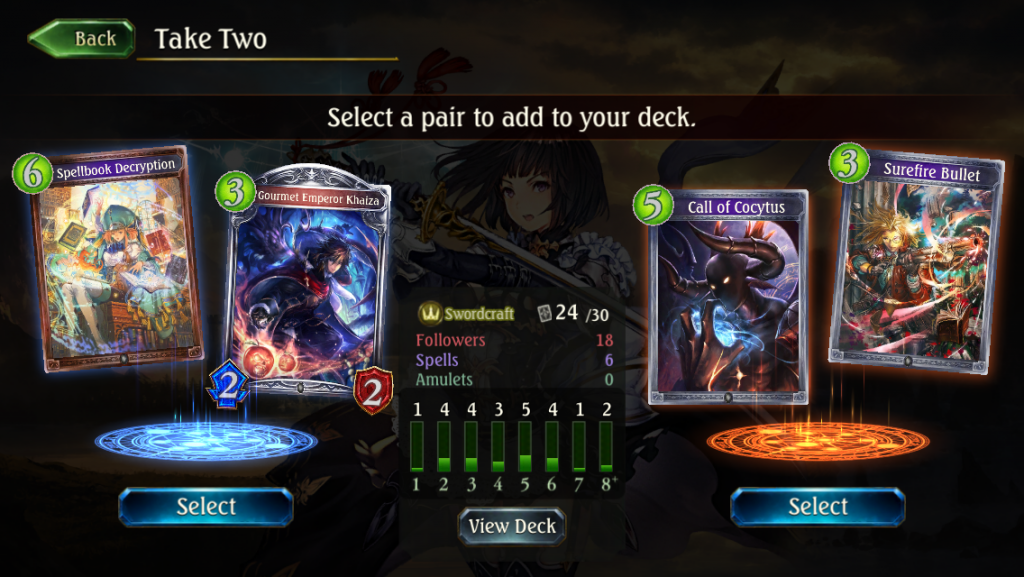 Take Two is not affected by your card collection. That means your opponent has no card advantage over you at the beginning of the draft. Owning good cards contributes to winning in a constructed match, but that advantage is nullified in Take Two.

On a side note, whenever I play against another player, be it on my own time or on my stream, I always opt for Take Two unless I need to play a constructed deck. I own almost every card in the game, but that might not be the case for my opponent. I am convinced that Take Two offers fairer matches than the constructed format.

In every Take Two run, you play up to five matches. The number of matches will not change regardless of the deck you make. Fast players can even finish a run (from drafting to completing all five matches) within an hour. Rewards depend on the number of wins you can rack up, with five wins netting you rewards that are worth more than the entry fee. 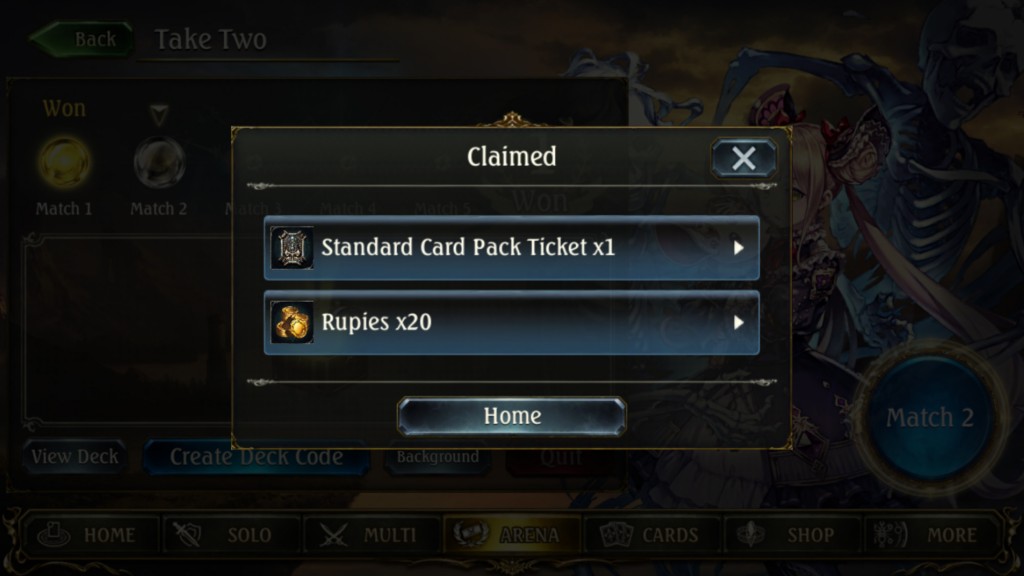 Example of rewards from a 1-win run.

If you calculate one pack at 100 rupees, three or more wins will make up for the entry fee. If you can win consistently, it would be a better investment to play Take Two than simply buying card packs. First, focus on winning three of the five matches, and then revise your playstyle to go for 4-5 wins once you become familiar with the format. Strive to be a Take-Two master!

Acquire this flair by finishing 20 Take Two runs with 5 wins.

The First Step on a Long Road – Take Two for Beginners

I’ve shared my thoughts on why Take Two is awesome. However, some of you might be more concerned with how to dominate the format. Actually, the knowledge and skills required to be good at this format go beyond that of constructed battles. It’s not uncommon to hear about people who have played an outrageous number of ranked matches and yet cannot win in Take Two.

Allow me to give you a few simple pointers to keep in mind.

A significant difference between constructed matches and Take Two is the amount of time you should spend taking each turn.

More often than not, the correct move for a constructed deck is already determined. But as every Take Two match is unique, you must be flexible. There are many situations where it’s difficult to tell whether you have the advantage or not, because the cards in your opponent’s deck are a complete mystery. Even if you keep track of all the cards in your own deck, unlike a constructed match, it is extremely difficult to have the perfect answer at the right time. That said, a decision has to be made in order to gain the advantage against your opponent (on the board or quality of cards in hand), and you must be able to maintain that advantage throughout the game.

Therefore, the basic strategy for taking a turn is based on predicting what will give you the advantage. In any given match, it would be next to impossible to think of every possible outcome in a short amount of time. In a constructed match, each player can choose how many of each card to include in their decks. In Take Two, on the other hand, it can be a valid strategy to ignore cards your opponent will most likely not have (gold and legendary cards), and focus on the more likely threats.

There is another thing you have to be careful of when drafting cards.

It is important to include cards that are strong on their own, even in constructed matches, but what’s more important is the cost of the cards in the deck. In particular, the number of 2-cost 2/2 followers in your deck will sway how well-rounded it is.

As mentioned in a previous article, a 2-cost 2/2 follower can neutralize a 1-cost follower and also be used to potentially deal with a 3-cost follower, making them extremely useful and versatile.

An early game lead can snowball into game advantage into the midgame and late game. Therefore, in order to guarantee you have a play on turn two, it would be best to draft around six to seven 2-cost 2/2 followers.

Important Points During the Draft

One aspect of Take Two I pay particular attention to is how smooth the early game plays out. Regardless of whether you go 1st or 2nd, having a strong early game is equally important. You need to draft cards so to have something to play on turns 2, 3, and 4 to avoid passing on a critical turn.

Low-cost followers with Enhance abilities are very versatile, and can even serve as trump cards if drawn later in the game. These cards should be drafted with a higher priority.

Evolution timing in Take Two is also more critical than in constructed matches. In most cases, players will evolve followers to gain the advantage on the board, but this can be your downfall if used carelessly. It’s very important to determine the right time to use an evolution.

In Take Two, removal spells that can take out any follower, in addition to followers with Storm or Rush, are extremely valuable. This is because these cards can affect the board state without the use of an evolution. Cards like these should be proactively drafted.

-Choose a strategy based on prediction

-Determine the right time to evolve

If you can keep these three points in mind, you will find it easier to win in Take Two. It may even completely change the way you feel about the format.

In the next article, I’ll continue my introduction of Take Two by talking about which classes to pick and which cards to choose. Until then, keep enjoying Shadowverse!