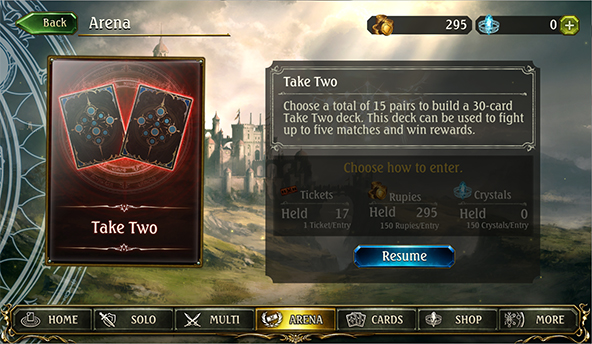 In my last article, I talked a bit about the changes to the Take Two format and some important Neutral cards. This time I would like to focus on Tempest of the Gods cards from other classes, especially bronze and silver cards. You will encounter these cards the most, so it’s important to understand their effects on the meta! 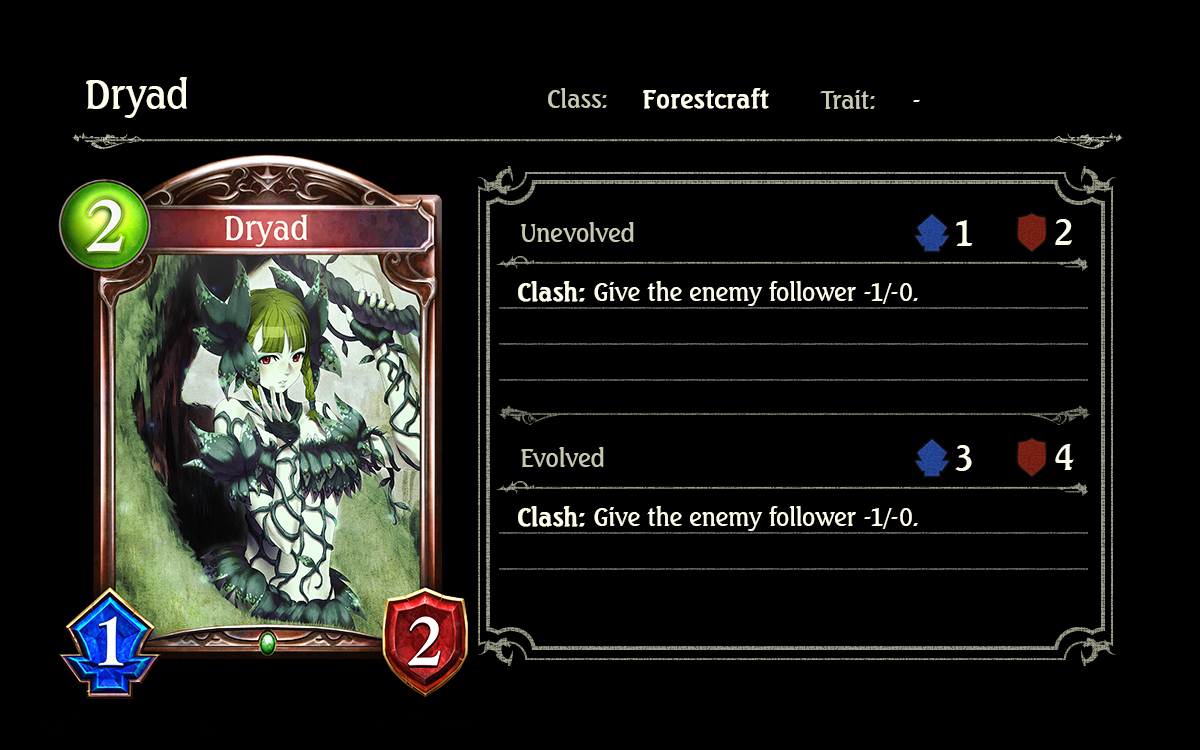 Dryad is a 2-cost follower with 1/2 stats. Although this might make it seem ill-suited for conflict, its Clash effect can seriously debilitate your opponent’s followers. This effect is perhaps illustrated best when you go first and it’s the second turn. You can often get good value from this follower when you destroy an enemy 2-cost 2/2 follower and weaken another in the process. 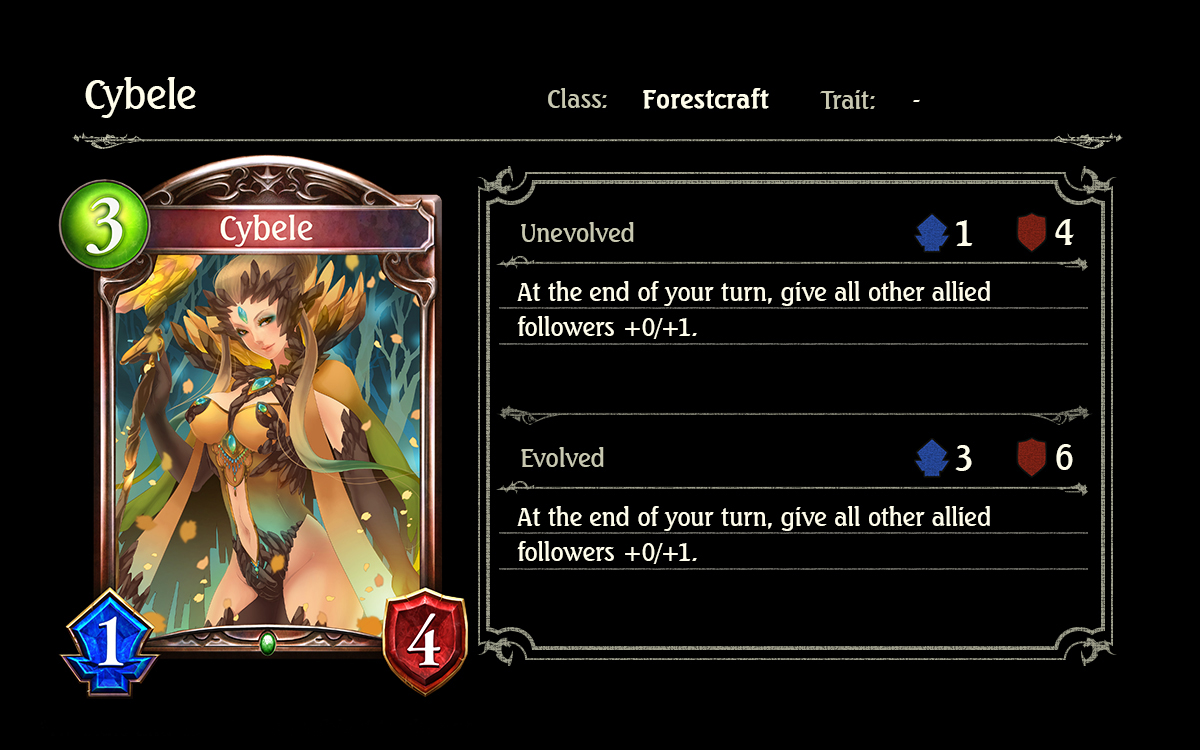 Cybele, a 1/4 follower, can come onto the board early and stay there for several turns. While your opponent is trying to remove it, it will continue strengthening your allies. Try using this card with Dryad to experience what could become one of the more powerful staple combos of post-Tempest of the Gods Forestcraft. 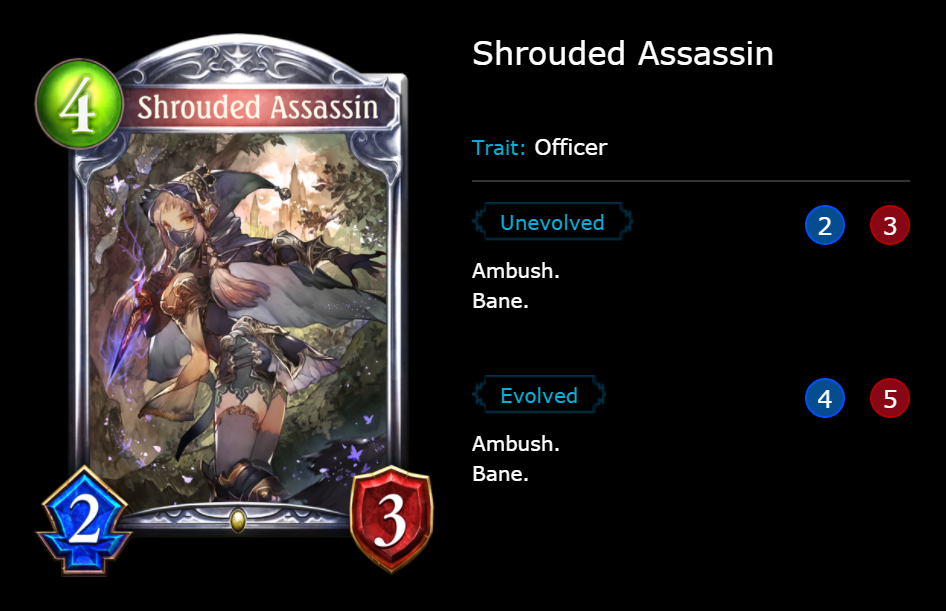 When the first player drops a 4-cost follower on turn 4, the opponent often wipes it out with an evolution on the following turn. But because Shrouded Assassin has Ambush, you can make sure you’re prepared for any surprise. Furthermore, Bane is a powerful ability in the Take Two format, because it guarantees removal that’s useful even in the late game. Play followers with Bane to apply pressure on your opponent and take an advantageous position. 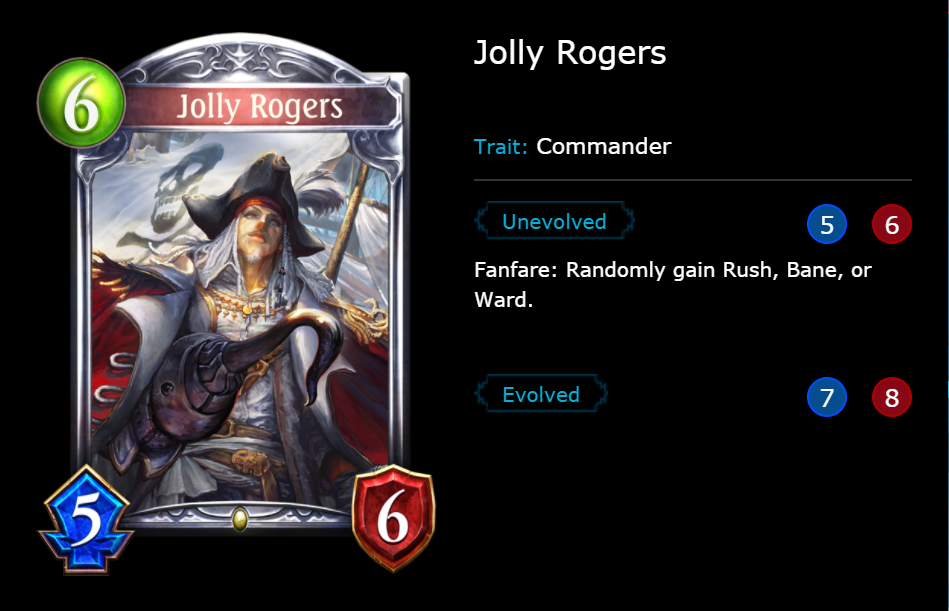 Jolly Rogers is a 6-cost 5/6 card that randomly gains Rush, Bane, or Ward, making it a powerful option for a Take Two pick. Swordcraft has a lot of strong, high-cost cards that are worth picking, but if this doesn’t throw off your deck’s balance, you won’t go wrong by picking this one. 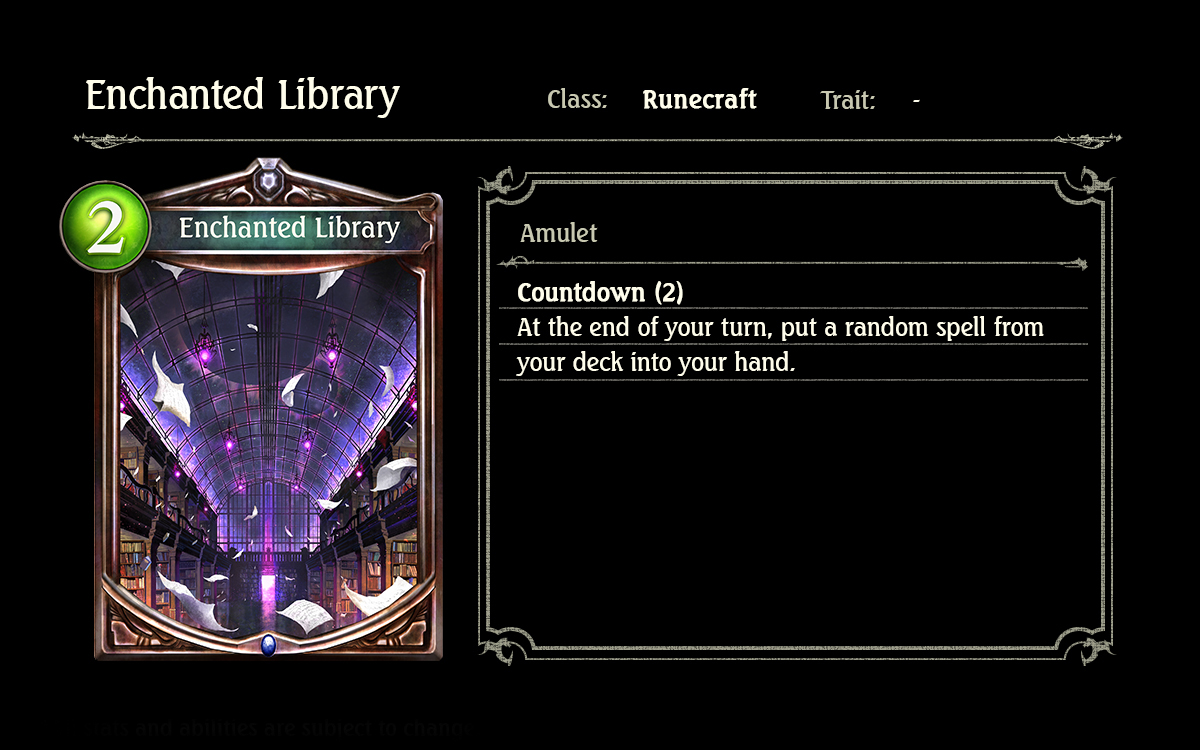 This amulet’s value changes depending on the spells you are able to pick. Instant removal spells are always great, but they’re not worth anything if you don’t have them when you need them. Enchanted Library can retrieve powerful spells as part of its Countdown effect, allowing you to turn one card into two. Unleash a barrage of spells and remove your opponent’s offensive threats! 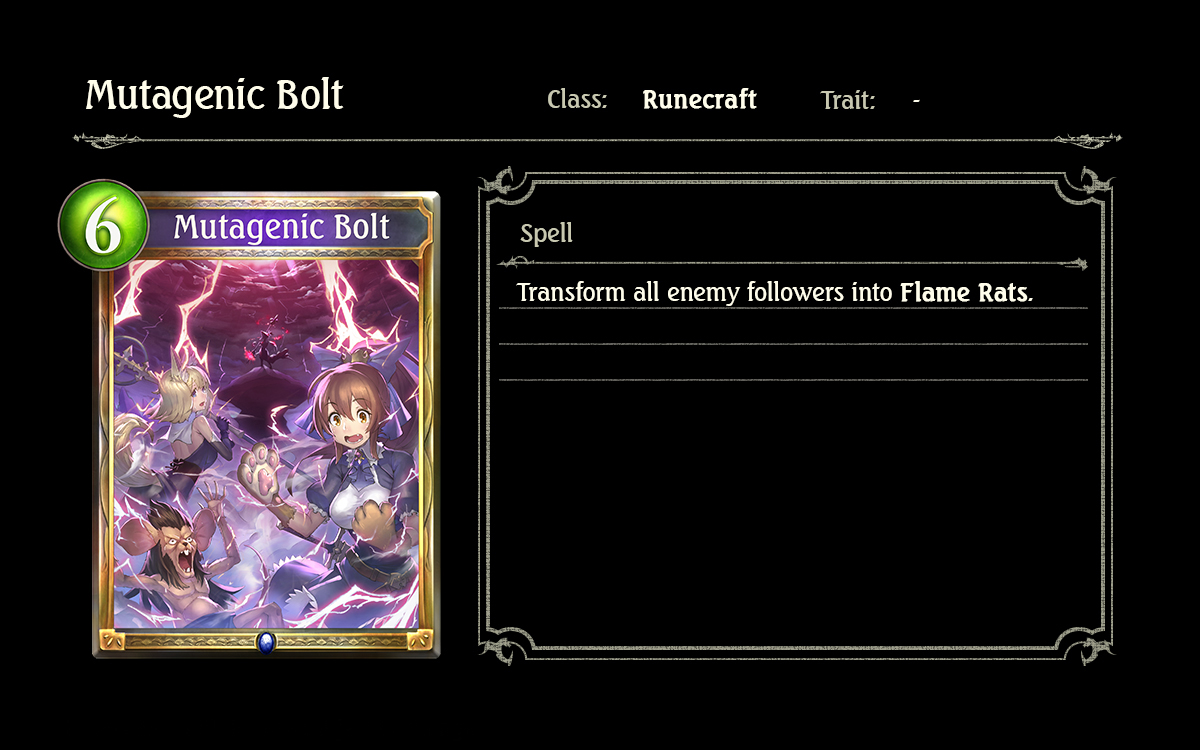 Transforming all enemy followers into Flame Rats via Mutagenic Bolt is a flexible spell effect with both offensive and defensive applications. Played offensively, it can get rid of your opponent’s pesky Ward-bearing followers and deal some extra damage; played defensively, it can cripple their powerful followers in an instant. When you have defense to spare, this single card has the potential to swing games. 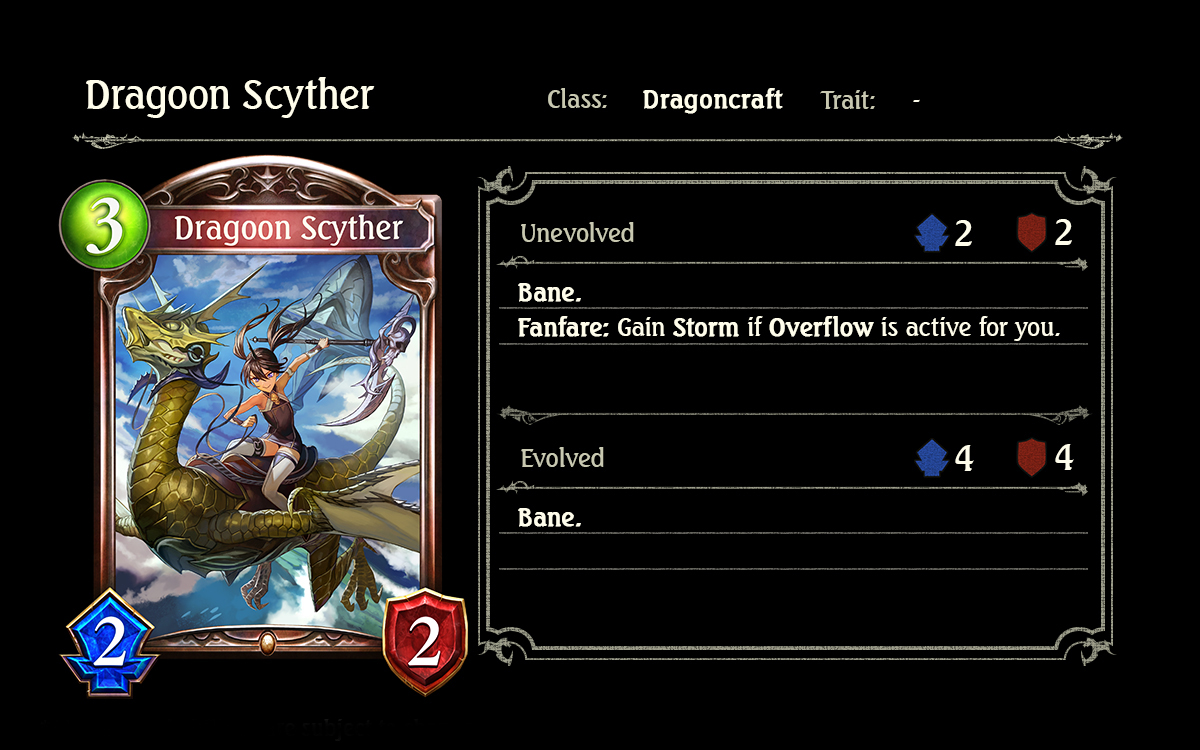 I know I’ve been repeating that Bane is a powerful effect over and over again, but a follower that has Rush or Storm in addition to Bane is truly a top-class option. Dragoon Scyther is a highly effective 3-cost card that can take down nearly anything that doesn’t have Ambush, and it’s useful at any point in a match. This is even truer after Overflow activates, effectively giving you a sniper that can swoop in and remove any hulking threats your opponent may play. 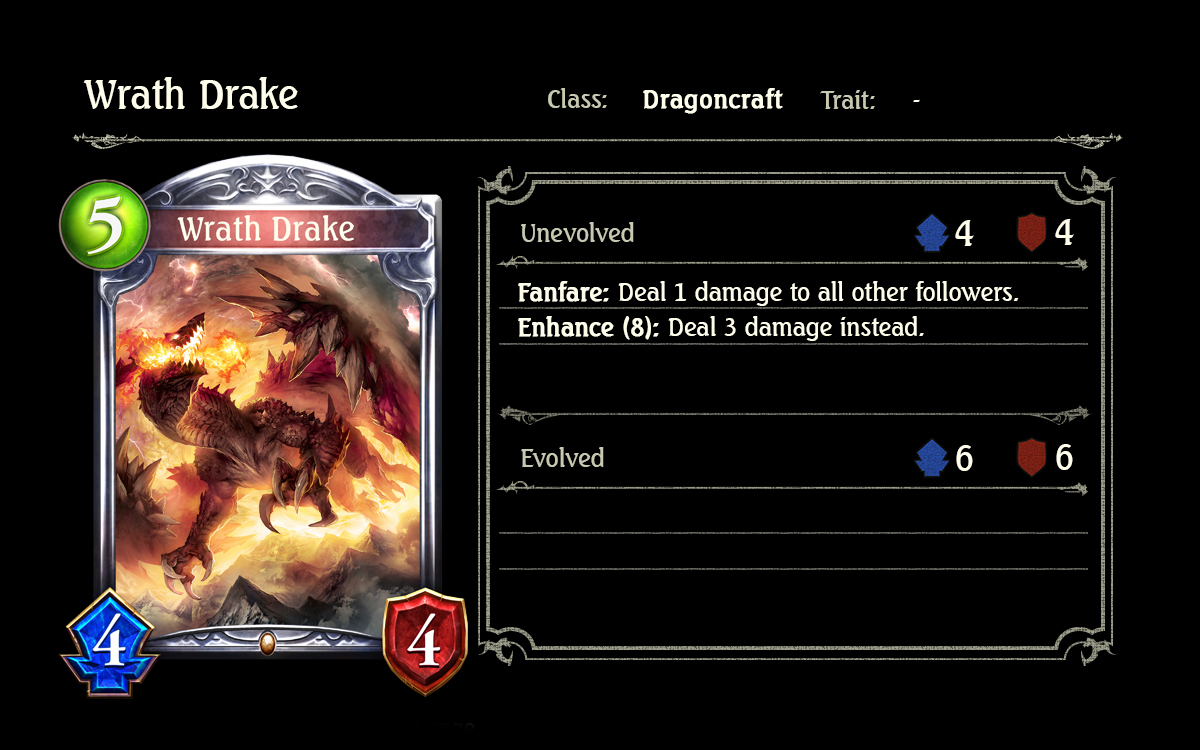 Deal 1 damage to all other followers, or, with the Enhance effect, deal 3 damage instead. Both of these effects are great options that can turn a dire situation into a sure victory. You can keep it in your hand and wait for the perfect opportunity to play it. But it’s not unusual to end up with multiple Wrath Drakes after drafting, so playing one on turn 5—even if it can’t take down any enemies—might make your opponent wary of more. 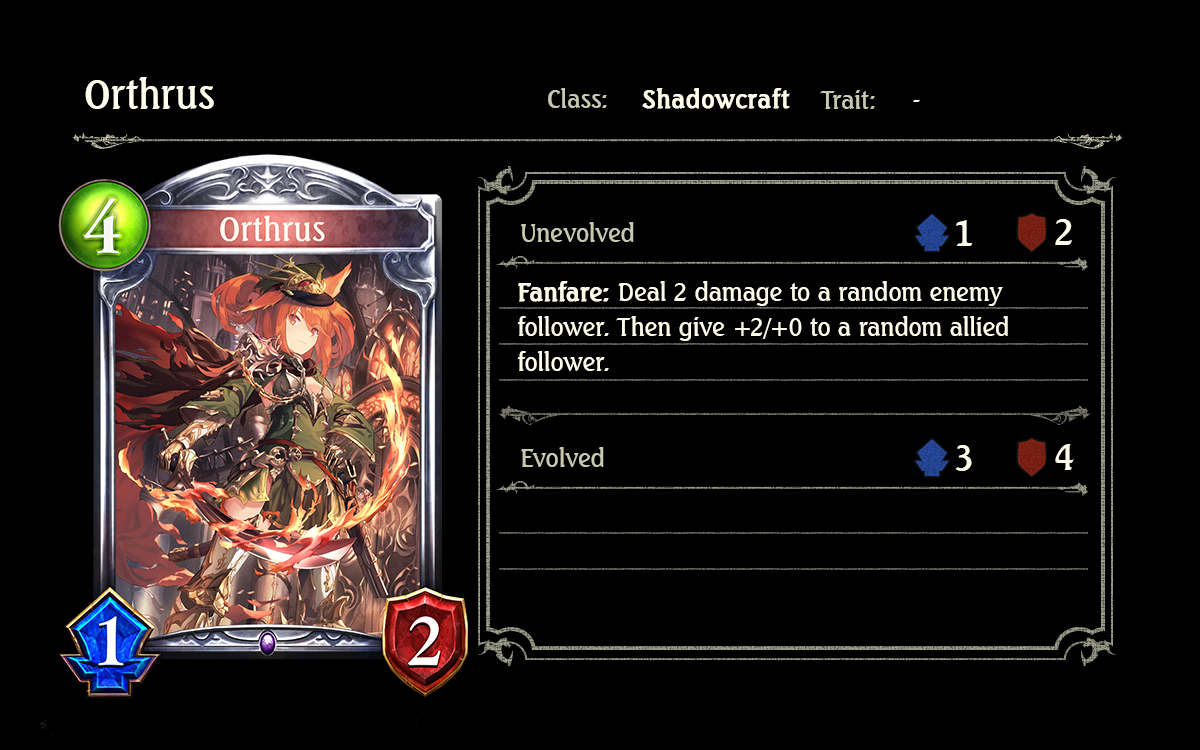 Orthrus’s ability to strengthen an allied follower while removing an enemy follower is put to great effect in constructed decks, and it’s also an effective choice for Take Two. If you’re going against Shadowcraft, make sure you clear the board before turn 4 to contain the havoc this card is capable of. 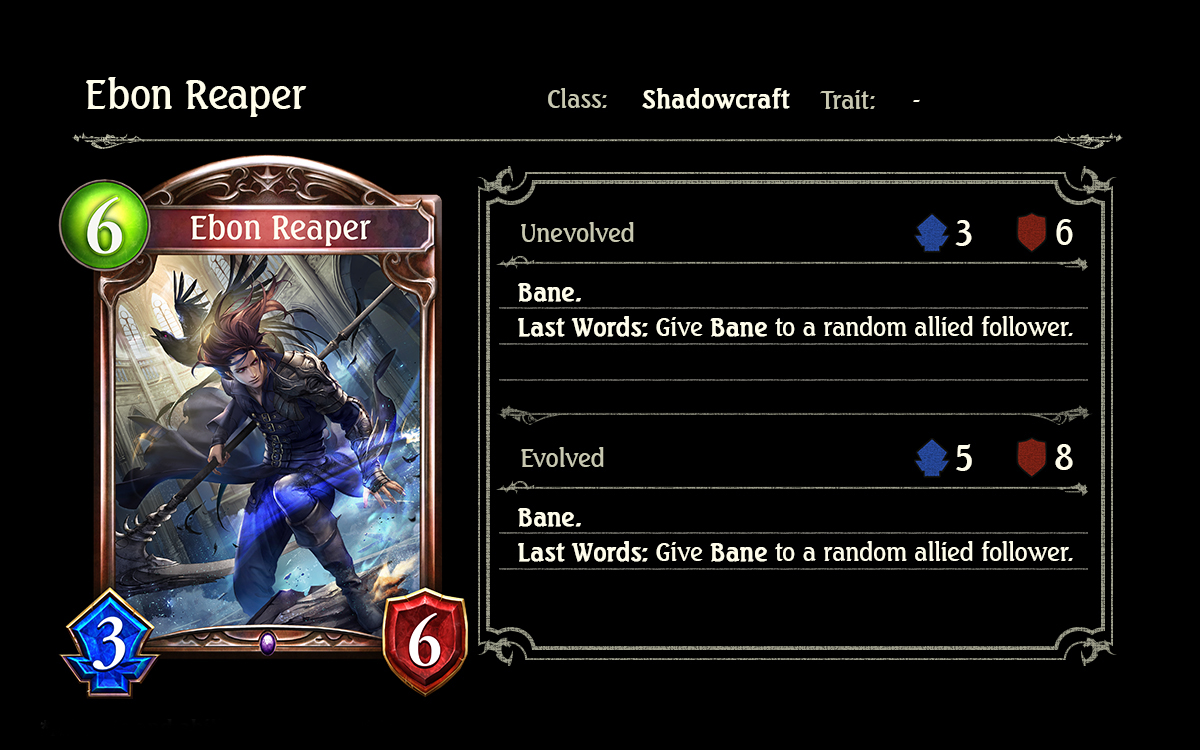 Ebon Reaper’s power really solidifies your board presence in the late game. With the ability to give Bane to an allied follower, it can prevent big plays from your opponent. It’s also a 3/6, which means it could trade for an evolved follower or even multiple other cards. These qualities could make it an incredibly valuable pick. 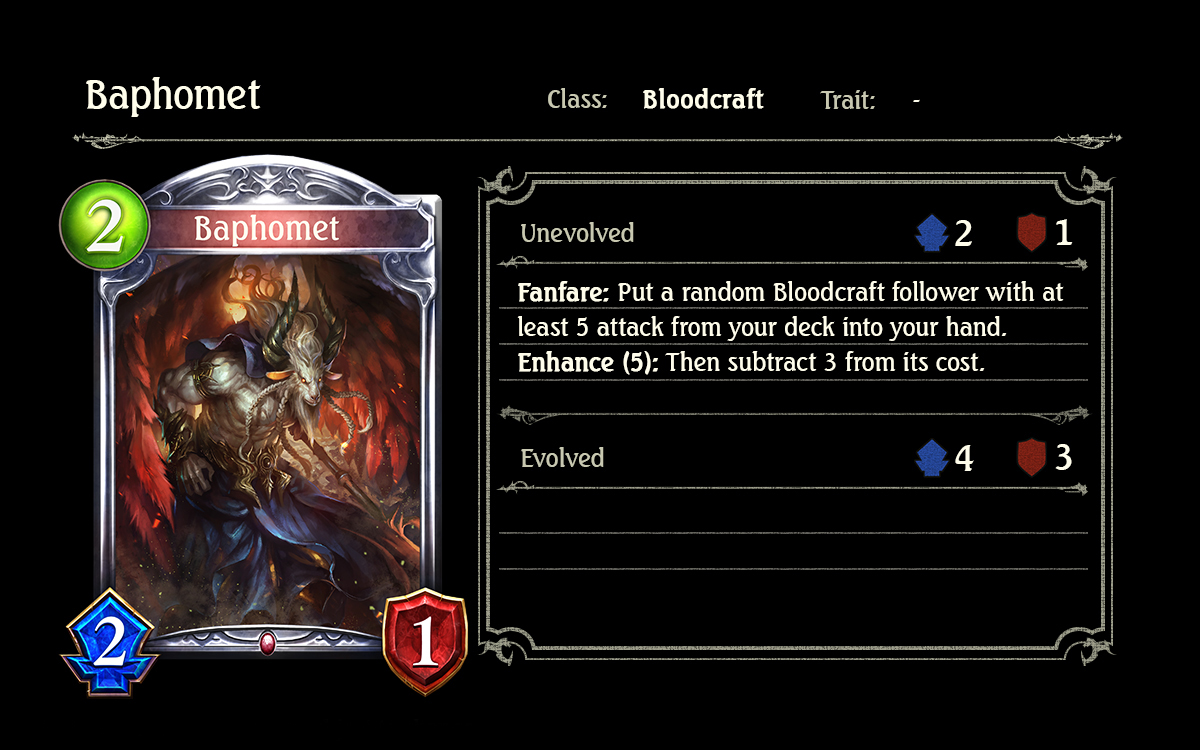 Every class has different qualities, but Baphomet possesses an effect like that of the Swordcraft follower Maid Leader. In addition, it’s a 2-cost follower with 2 attack, meaning you won’t lose board presence when playing it on turn 2. Use its effect to easily gain a card advantage over your opponent, which will put you one step closer to winning. Make sure you add several cards with more than 5 attack to make use of its power. 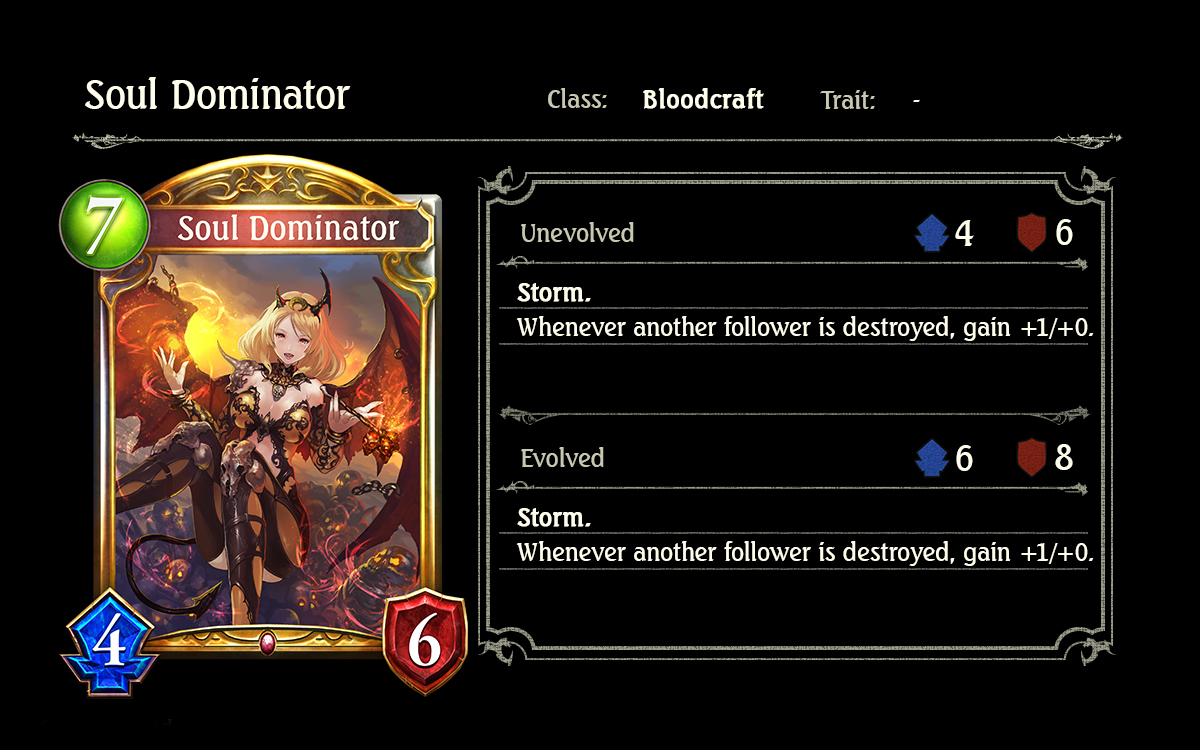 Spells aren’t as common in Take Two as they are in other formats, and followers usually trade with each other. Soul Dominator, in addition to its ability to do sudden damage with Storm, can increase its lethality with every follower that falls around it. Followers with Storm or Rush are especially valuable after turn 7—they can make it as if you had an extra evolution point—so I expect we’ll be seeing this card in constructed decks as well. 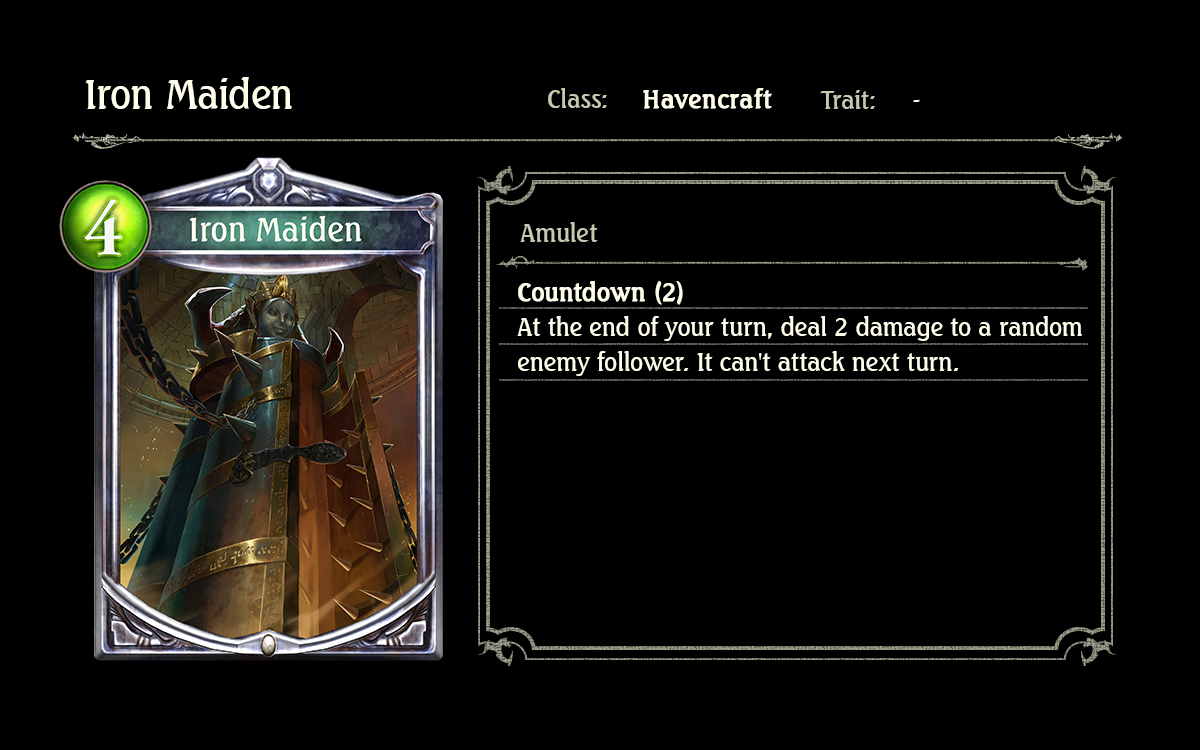 Although you can certainly use Iron Maiden to ping small followers, it can prevent larger followers from attacking, giving you the ability to claim board control. However, if your board is already looking a bit frail, this card’s effectiveness goes down. It also doesn’t synergize with cards that reduce Countdown effects, like Candelabra of Prayers or Calydonian Boar. Always build a Take Two deck with the picks you’ve already made in mind. 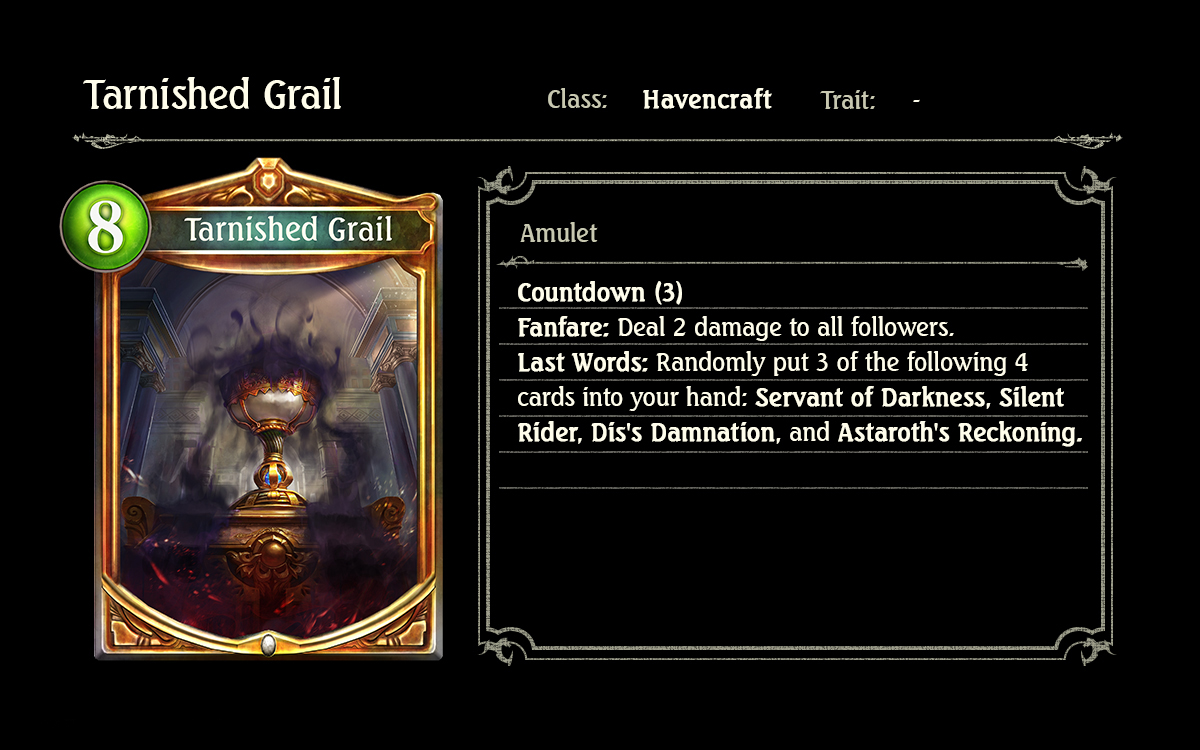 A lot of the most powerful picks in Take Two require only time to pull out a win. Tarnished Grail is no different. This card allows you to make an Apocalypse-style deck in Take Two. Much like Call of Cocytus in standard decks, it really shines in longer matches. Buy time by using cards that restore defense or cards that advance your Countdown effects to secure victory with Tarnished Grail.

Next Time: Get ready for the latest expansion, Wonderland Dreams!