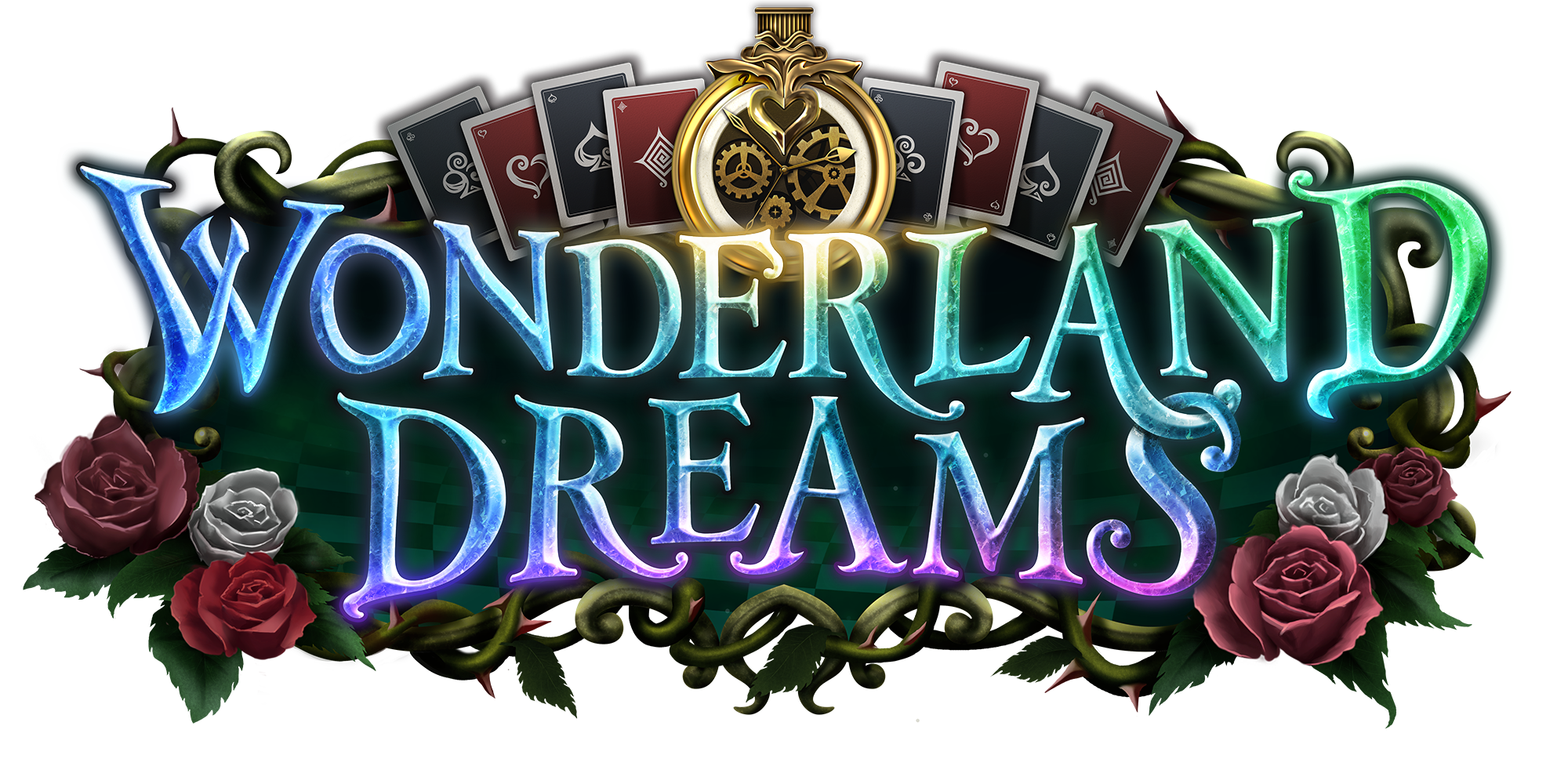 In my last article, I introduced new Neutral, Forestcraft, Swordcraft, and Runecraft cards from Wonderland Dreams and how to skillfully use them in Take Two.

This time I’ll be talking about cards from the remaining classes. I hope that this article serves as a valuable reference point for you when making your card selections in the arena! For those not familiar with the differences between Take Two and standard matches, it may be a good idea to check out my introduction and strategies for the arena. 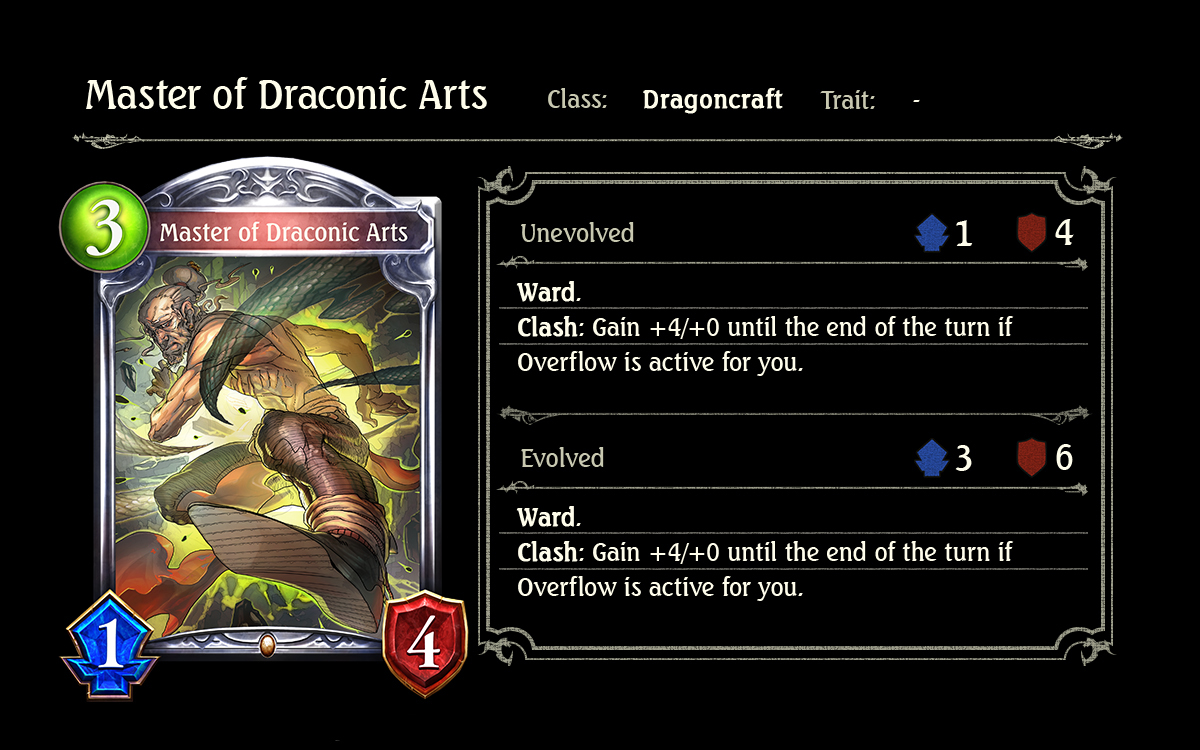 When playing Dragoncraft, it’s all about controlling the board until you can get your heavyweights out to dish out some real damage. So cards that can protect your leader or restrict your opponent’s options are vital for success. Followers such as Master of Draconic Arts that can be played effectively during both the early game and late game are always safe bets when making a Dragoncraft deck.

Compared to constructed matches, Take Two matches are more often driven by reactions rather than having overarching game plans—the flow of a game will be determined by whoever is in control of the board. Using a low-cost follower to take out a higher-cost follower can essentially give you the lead, widening the gap between you and your opponent. 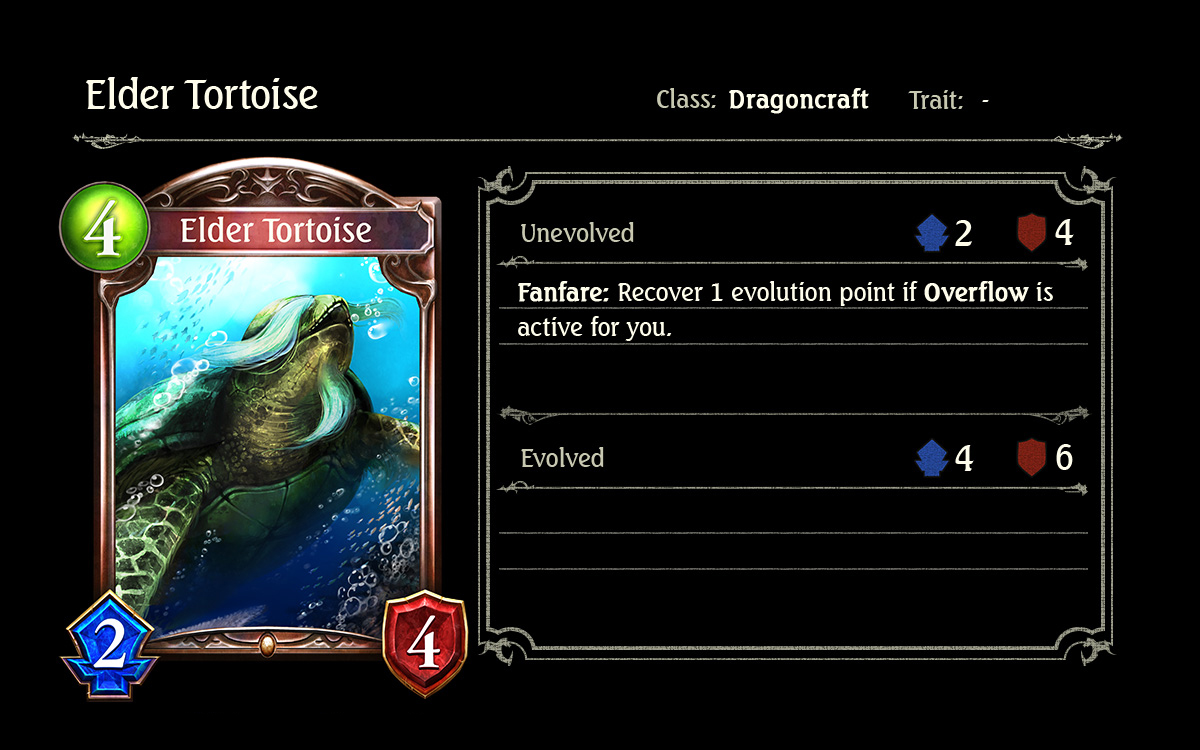 The timing and usage of Evolve is a crucial factor in determining the outcome of a match. A well-timed evolution can help you push an advantage or force your opponent to react by using one of their own evolution points defensively, further cornering them into a dire situation.

A proficient Take Two player always keeps the number of evolution points remaining for both players in mind, playing strategically to force the other player to evolve. So, how does one counter this? The answer is simple: more evolution points! Catch your opponent off guard with an Elder Tortoise to restore an evolution point to your leader. Having opponents play outside of their game plan is an indispensable stratagem for staying in control—making them play your game, not theirs. 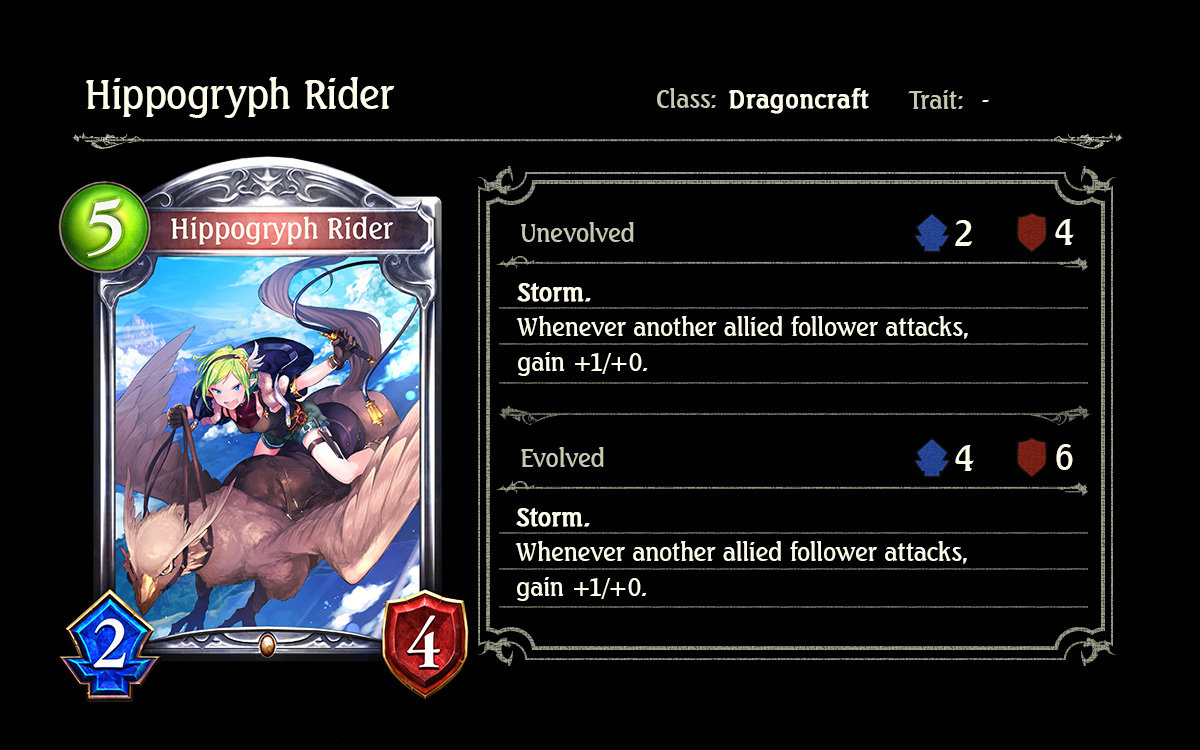 Followers with Storm can swiftly dispose of troublesome enemy followers and turn the tides of a game—when played with allied followers on the board, Hippogryph Rider can pump up its attack stat and immediately begin dealing devastating amounts of damage to an enemy.

Hippogryph Rider deals more damage solely based on the amount of allied followers on the board, regardless of their stats. Due to its potential for explosive damage, this follower will likely be your opponent’s top priority.

Other similar cards such as Ephemera, Angelic Slacker that can quickly strengthen other allied followers are currently on the rise in Take Two. If you happen to be on the receiving end, try and nip these situations in the bud before they get out of hand! 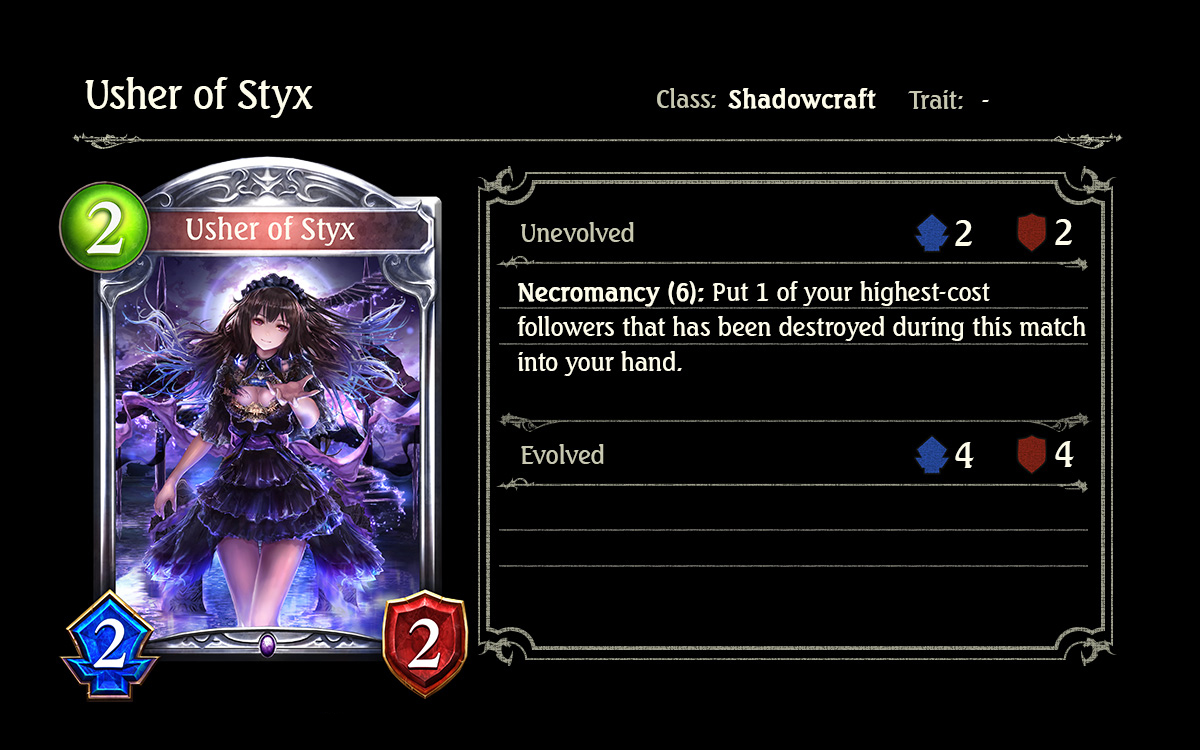 Shadowcraft followers gain additional effects and abilities through Necromancy by consuming the shadows of their fallen comrades. Similar to Rise of the Dead, Usher of Styx can bring one of your strongest cards destroyed in a match back from the grave. Not only that, due to its low cost it’s a versatile card that can be useful to have in your hand at any time.

The possibilities for Necromancy abilities grow with the introduction of each card set, so get familiar with the cards in your deck. The key to victory when playing Shadowcraft is having presence of mind to keep track of the remaining shadows in your deck, and when to consume them. 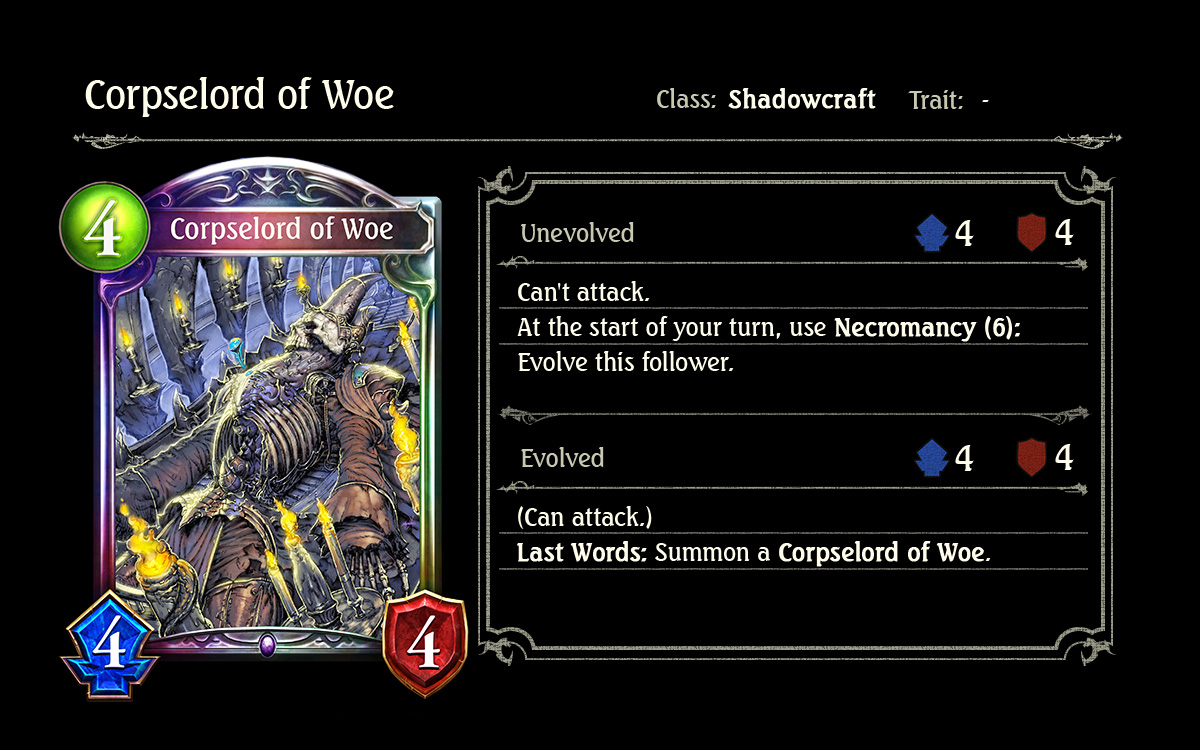 Now here’s a sticky card that’s sure to give your opponent a bad time if not dealt with quickly, with potential to terrorize your opponent with pressure for turns to come.

When going second, you can actually play Corpselord of Woe on Turn 4 and immediately evolve it even if you don’t have the spare shadows to use Necromancy. This way you can deal some quick damage to any enemy followers, and also give it Last Words that are just to die for—again, and again, and again…

There’s nothing more satisfying than wrecking your opponent’s entire board with a single card, especially if it does so at the end of each and every one of your turns while in play. 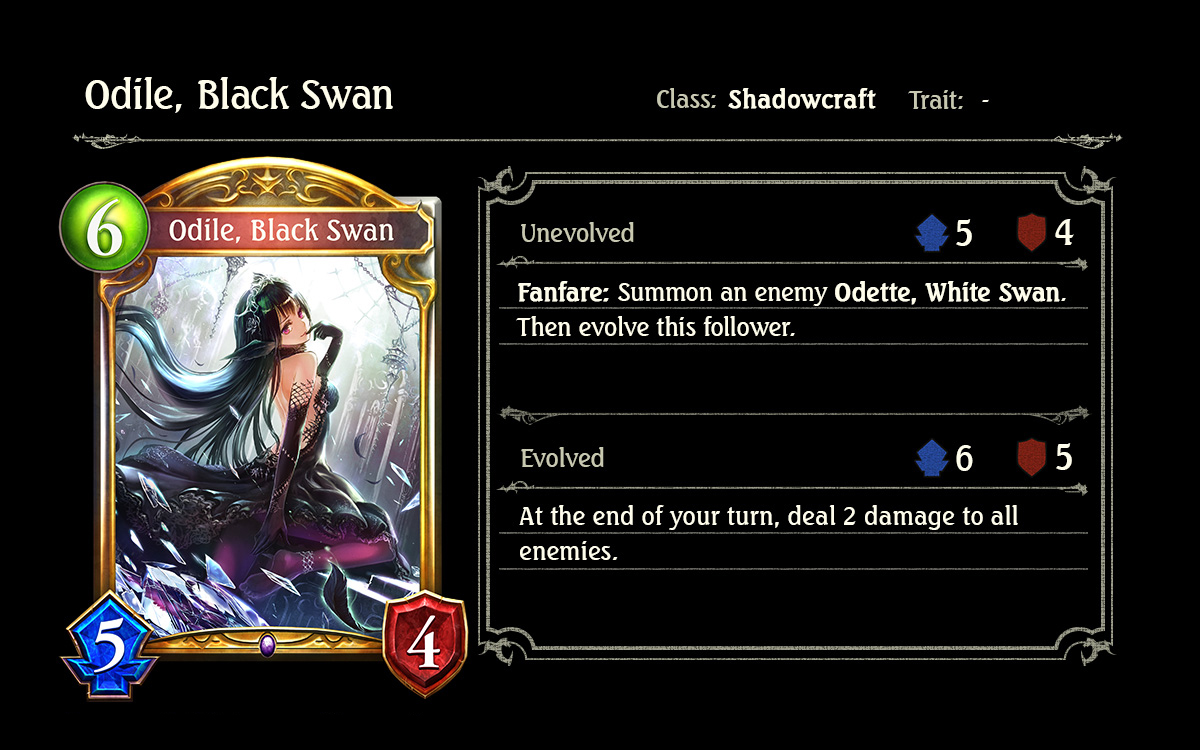 The ability to repeatedly blast all enemies for 2 damage makes Odile, Black Swan an excellent pick when building a Shadowcraft deck for Take Two. Although you shouldn’t expect Odile’s time on the board to last longer than a turn or two (as she is likely to be targeted), her Evolve effect makes her already well worth her cost.

As with all cards that have board clearing potential, timing is everything. Choose when to play this card wisely and make quick work of your opponent’s followers! 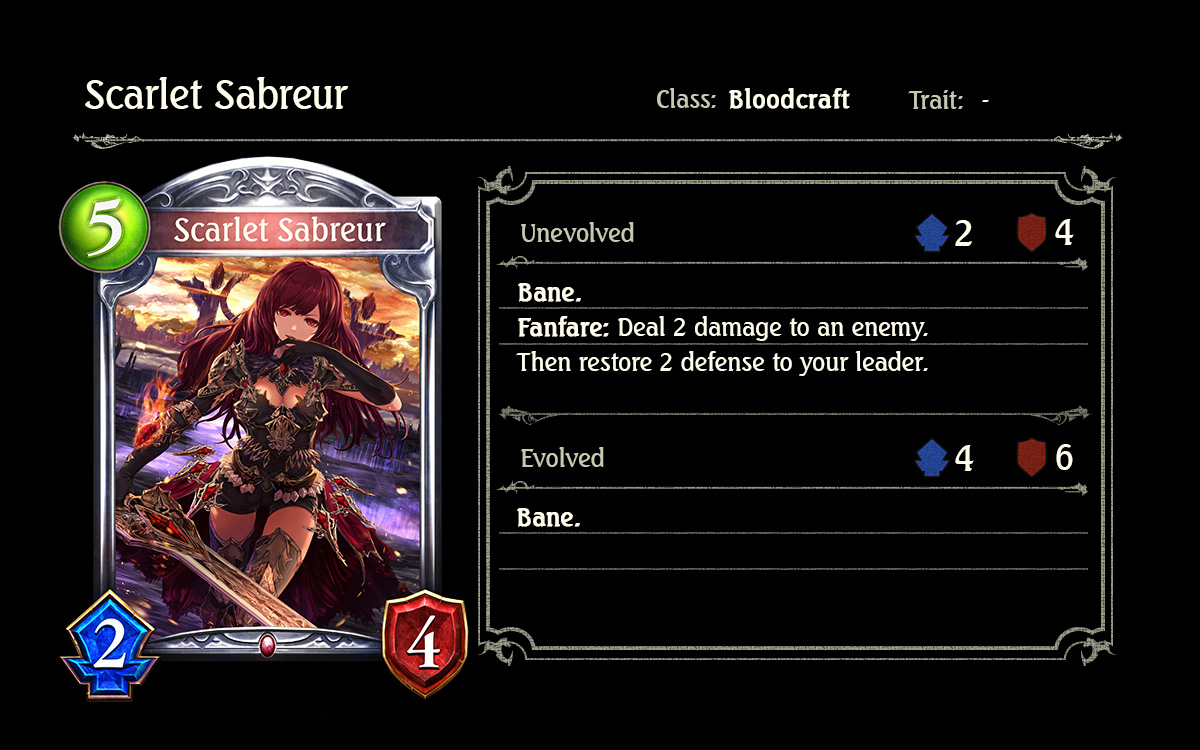 With Bane on top of a Fanfare effect that simultaneously damages an enemy follower and heals your leader, Scarlet Sabreur is an incredibly useful jack–of–all–trades for fleshing out any Bloodcraft deck.

I mentioned in a previous article that followers with Bane and high defense can be difficult to deal with, making them valuable cards for Take Two. Scarlet Sabreur is nearly guaranteed to take out at least 2 or 3 enemy followers or any imminent threat on your opponent’s board. 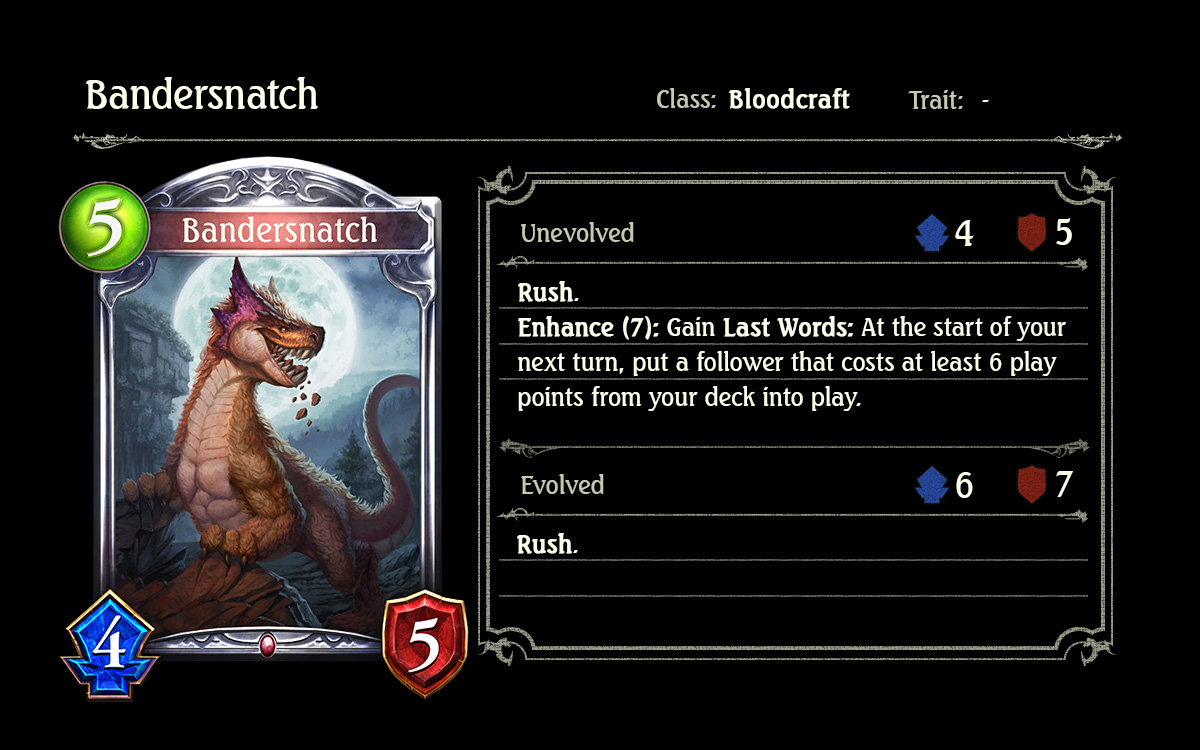 In Take Two, you’ll be playing with a smaller deck and resource pool compared to constructed decks—making cards with enhanced versions that can serve multiple purposes even more valuable. Bandersnatch can be played for some quick midrange damage, or utilized during the late game for substantial pressure by summoning a potentially stronger follower onto the board!

Bloodcraft has become more tenacious than ever since the release of Wonderland Dreams—especially bronze and silver cards. Sure, legendary cards can have staggering effects when played in a match, but the value of these lesser cards are a huge factor when choosing which class to play, so here’s some food for thought: it may be a good idea to analyze each class starting from the strength of their bronze and silver cards. 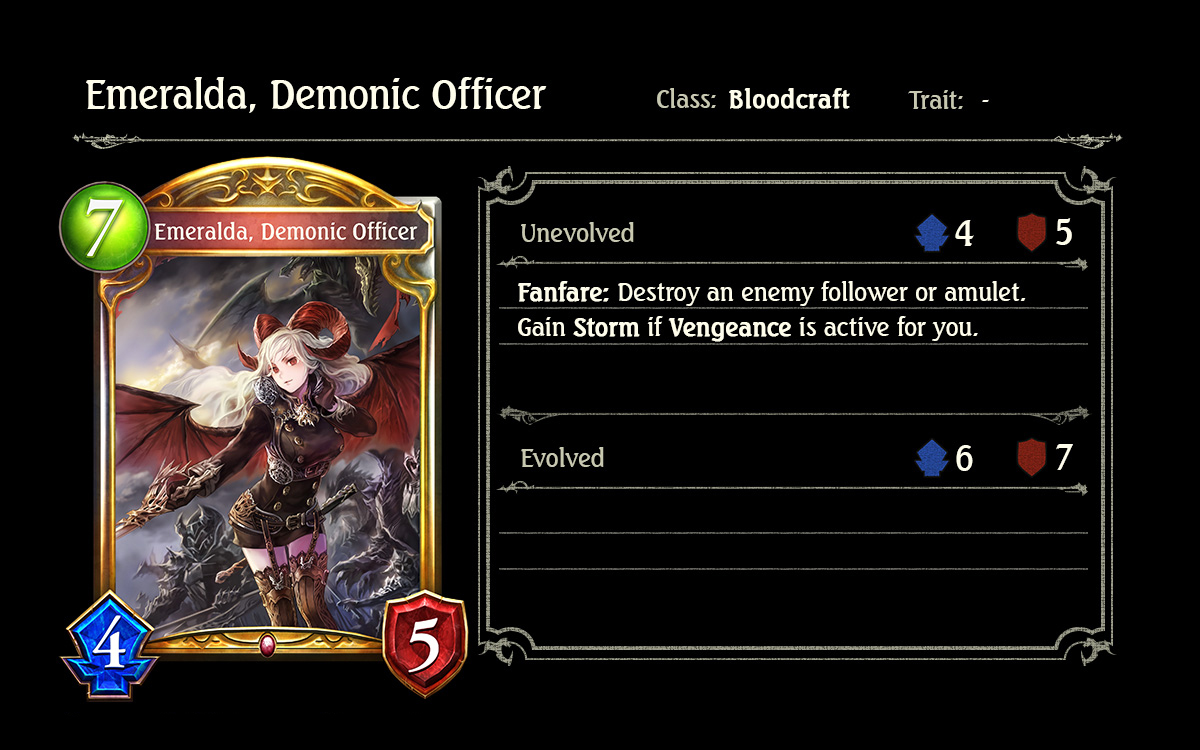 When choosing cards for Take Two, or any deck for that matter, of course you’ll want to prioritize cards you can get the most value out of when playing them. Followers that gain new effects or abilities when Vengeance is active for your leader, such as Emeralda, Demonic Officer, can be massive when played in the late game to swiftly finish off your opponent.

Cards that can be effectively played both offensively and defensively are worth their weight in gold for Take Two, so don’t neglect them! 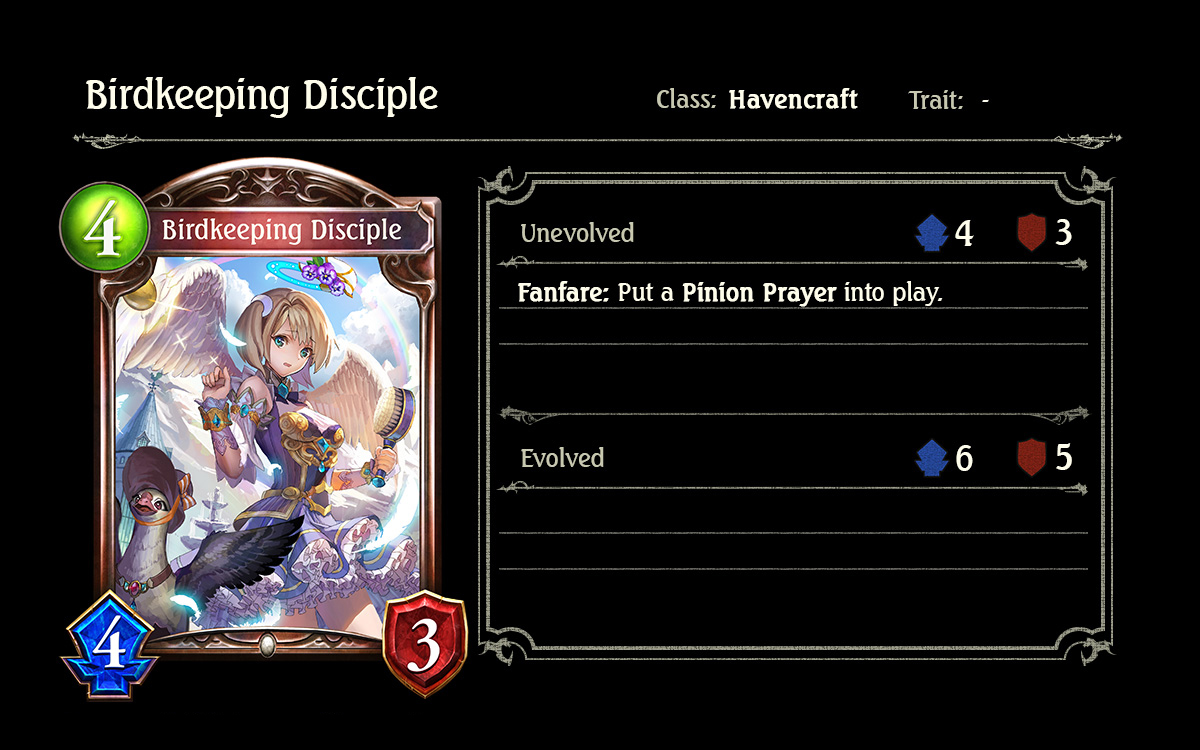 Cards that give you two followers for the price of one are prime choices for Take Two. In addition to its sizeable attack stat, Birdkeeping Disciple also puts a Pinion Prayer into play to keep your opponent on their toes. When going first, the card played on the fourth turn is crucial as your opponent will be ready to answer with an Evolve on the next turn. If you’ve got one readily available in hand, this follower is perfect for keeping any imminent evolved enemy follower in check, or simply to push your offense. 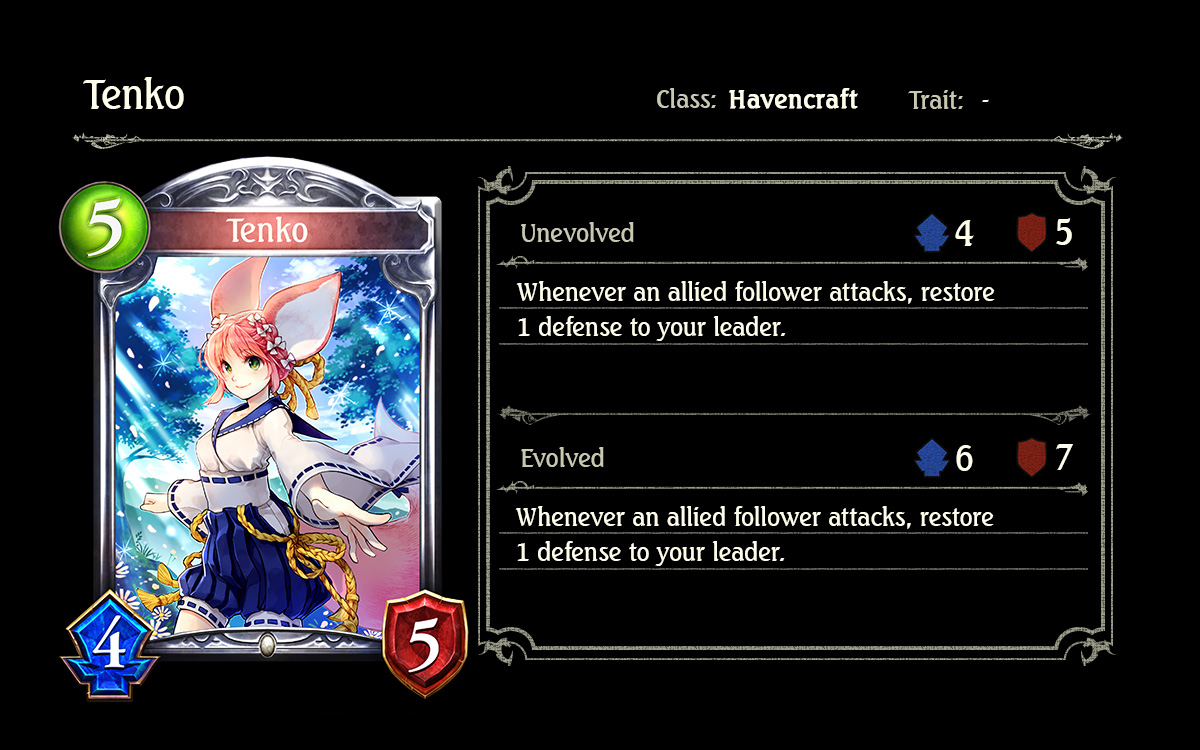 Being able to restore defense to your leader is often an overlooked ability, but in Take Two it has the potential to completely decide the outcome of a match. Play Tenko with as many allied followers on the board as possible to quickly widen your lead, or as a last ditch effort to snatch victory from the jaws of defeat!

When building a deck for Take Two, it may be tempting to pack as much offense as possible, but sometimes the best offense may very well be a solid defense. 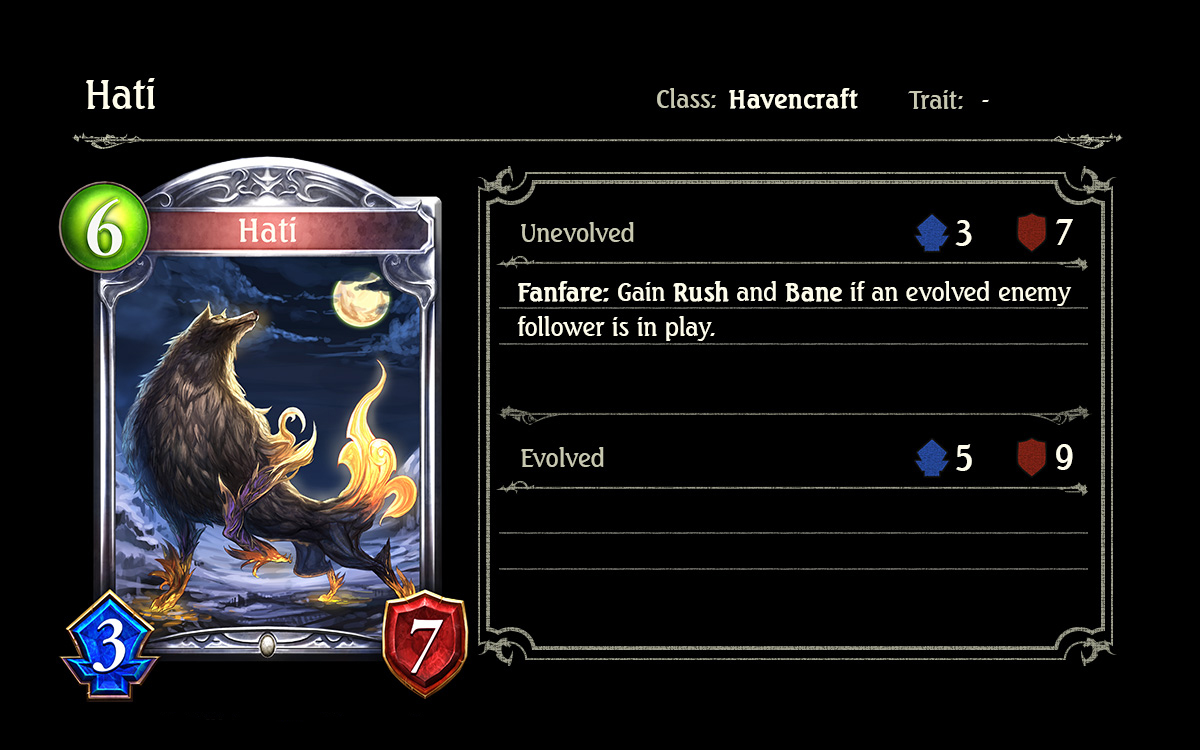 At this point I’ve already mentioned the advantages of having a follower with high defense and Bane enough times to sound like a broken record. However, top that off with Rush and you’ve got a deadly follower that can easily eliminate any nuisance on the board.

When playing against Havencraft, the looming threat of Hati may make you second guess yourself when evolving a follower, but on the other hand you’d be hard-pressed to win a match without evolving; your best bet may be to simply play in the hopes that your opponent doesn’t have this follower under their sleeve.

Now, if you’ve built Take Two decks that easily dispose of Hati without a hitch, you may already be well on your way to becoming an elite Take Two player! Do me a favor and let everyone know how interesting this mode can be, would you? Thanks!

That wraps it up for this Take Two card roundup! Did you learn anything new?

If you haven’t tried out Take Two yet, I certainly hope this article has piqued your interest. Until next time, I’ll see you in the arena!